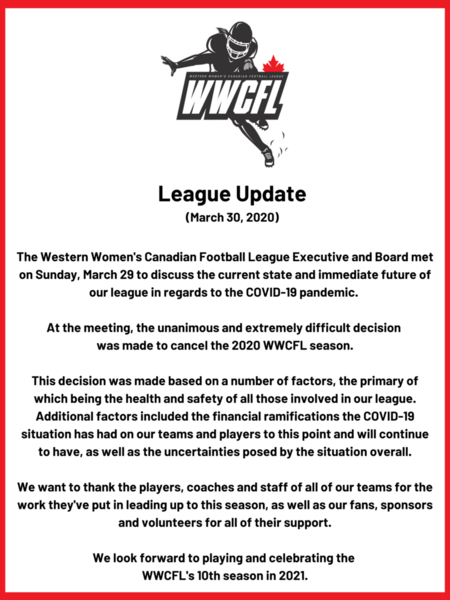 A growing interest for women's tackle football led to the creation of the Western Women's Canadian Football League in 2011. Today, our league consists of eight teams in seven major Canadian cities, spread across three provinces. Those eight teams are divided into two conferences; the Prairie Conference (out of Saskatchewan and Manitoba) and the Western Conference (out of Alberta). In the Prairie Conference, are the Regina Riot and the Saskatoon Valkyries from Saskatchewan, and the two Manitoba teams, the Winnipeg Wolfpack and the Manitoba Fearless (based out of Winnipeg). Over in the Western Conference, we have the Calgary Rage, the Edmonton Storm, the Lethbridge Steel and the Northern Anarchy (based out of Grande Prairie).

Each year, our teams compete in a four-game regular season within their conferences beginning in early May and running until mid June. That regular season is followed by a playoff season of three games; the quarter-finals, the semifinals and the WWCFL final. However, we have had to adapt our schedule some seasons due to the Women's World Tackle Football Championship conflicting with our season.