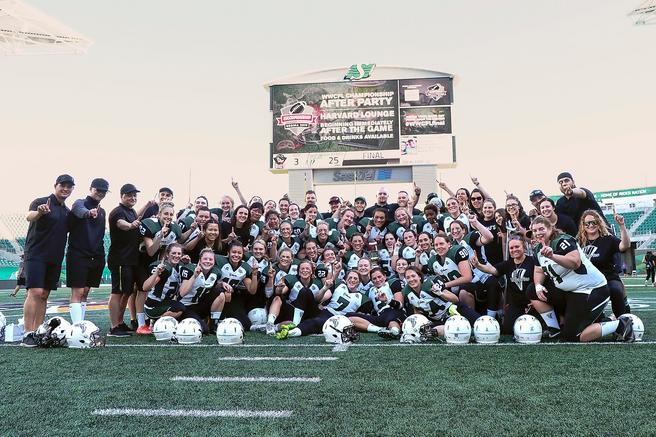 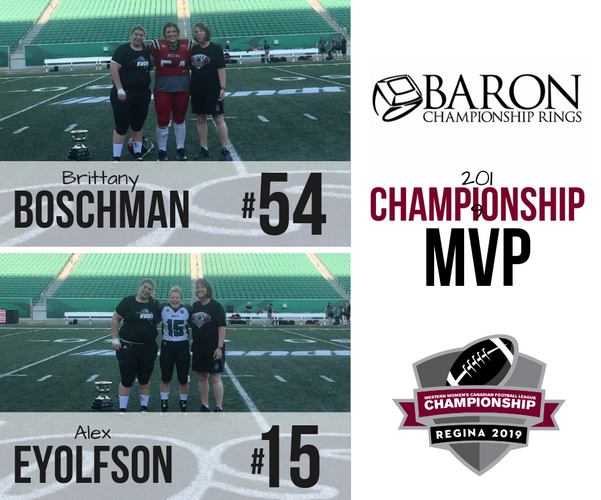 While celebrating a Western Women’s Canadian Football League championship at Mosaic Stadium, members of the Saskatoon Valkyries were reminded of their previous visit to the facility.

On June 2, shortly before the Valkyries’ regular-season finale against the host Regina Riot, the Saskatoon players were informed that assistant coach Justin Filteau had been killed in a plane crash near Medicine Hat.

Saskatoon Valkyries quarteback Alex Eyolfson hands off to Sam Matheson, who rushed for 176 yards on 21 carries against the Regina Riot on Saturday at Mosaic Stadium.

“The game that we found out — the last game here in Regina — we signed the football,” Sam Matheson said Saturday after rushing for 176 yards and two touchdowns to power Saskatoon to a 25-3 victory over Regina in the league final. “Our goal once we won this game was to give the football to Nancy and Ron Filteau.”

In addition to signing the ball for Filteau’s parents, the Valkyries wore helmet decals bearing his initials to honour the former Saskatoon Hilltops and University of Saskatchewan Huskies linebacker, who grew up in Moose Jaw.

Justin Filteau, shown in 2015 as a member of the University of Saskatchewan Huskies football team, was killed June 1 in a plane crash near Medicine Hat. He was an assistant coach with the Western Women’s Canadian Football League’s Saskatoon Valkyries.

“Even before the tragedy that befell our team, we were working so well together,” Matheson said. “When Justin passed, it was like a fire was lit in our bellies that made us push even harder to get this for him. It was all for him.

“That’s all we thought about. Every single practice, it was for Filteau — always for Filteau.”

Saskatoon ended up winning all seven of its games, including three playoff contests, while outscoring the opposition 298-23. Regina was the only team to hit the scoreboard against Saskatoon in the post-season.

Last year, also at Mosaic Stadium, the Riot had won its second consecutive title by outlasting the Valkyries 14-10.

“This has been such a long time coming,” Matheson said. “We wanted this back for so long. We’ve been working so hard for the past three years to get it back.”

Saskatoon and Regina are the only teams to have won a championship since the league’s inception in 2011.

The Valkyries 1-0 after the first quarter on a punt single by Rienna Rueve.

The Valkyries went ahead 8-0 when Rueve converted a four-yard touchdown run by Matheson. That score, at 5:55 of the second quarter, was set up by a Kori Herner interception.

Another interception, by Ehjae Chan, gave Saskatoon a possession that resulted in a 15-yard field goal by Rueve with 14 seconds remaining in the first half. Saskatoon settled for a field goal despite advancing to the one-yard line.

Regina got on the board at 11:06 of the third quarter when Kyla Krenbrink kicked a 19-yard field goal. The Riot had advanced to the four-yard line before being assessed back-to-back penalties in front of 900 spectators.

After Regina failed on a third-down gamble, the Valkyries embarked on a scoring march that was punctuated by a one-yard TD run by Reed Thorstad at 8:13 of the fourth quarter. Rueve’s convert gave Saskatoon an 18-3 lead.

Matheson added a 14-yard TD run with 2:35 left in the fourth quarter.

“The score doesn’t really give a good picture of how the game went,” said linebacker Adrienne Zuck, who was named the Riot’s player of the game. “The last seven minutes of the game were when things changed drastically.”

It was a year of change for the Riot, which lost several players to “injuries, life, jobs,” as Zuck put it.

Despite finishing with a 1-3 regular-season record, the Riot advanced to the league final and threw a scare into an unbeaten foe.

“You can see our numbers are quite significantly lower, so it was a huge battle for us,” said Zuck, 33, a ninth-year player and an original member of the Riot.

“The journey wasn’t how we thought it would be. We fought our way through the adversity. Making it to the final was a great opportunity and I thought we put up a good fight.

“The stuff that we overcame, that’s not easy. That’s character and that’s stuff that builds. Yeah, this year we didn’t get what we wanted to, but to me every year that ends with a loss adds fuel to the fire and hunger for next season.